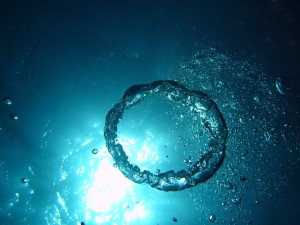 1920 – A global ‘flu’ epidemic is racing around the world. In just one hospital in India, 80% of the patients in a ward are dying from influenza pneumonia. The doctors are distraught as nothing seems to be working.

In desperation, a doctor suggests they try a little known method of killing viruses – injections of Oxygen enriched saline solution.

The weakest patient, who has had to be tied to his bed due to delirium, is given the solution. Amazingly, in just 6 hours he has recovered to the extent that he is sitting up and asking for food! (Reported in the Lancet, Feb 21, 1920)

What about you? Perhaps there are other things about this wonderful, natural gas that you didn’t know. Things that could help you glow with health.

And Oxygen? Again, we’ve all seen the decomposing power of Oxygen in fire – throw a log into the flames and it’s quickly reduced to ashes. Similarly, in your body, Hydrogen solidifies energies to make cell structure. Once a cell has outlived its useful life, Oxygen then burns the structure and dissolves the old cell back to fluid thus keeping everything clean, supple and detoxified.

There’s only one problem. If you’re low on Oxygen, the solidifying action of Hydrogen occurs to excess. Leftover combustion waste builds up in cells and the body becomes ‘toxic’. Under these ‘dirty’ conditions your body struggles to fight off disease and leaves you tired and lethargic. Higher Oxygen levels get your immune system back on track. The patient in India, mentioned earlier, experienced how effectively this can happen.

Could Oxygen slow the ageing process? Theoretically, yes. Sufficient Oxygen is believed to be capable of keeping your cells so clean that they would only wear out very slowly. According to some scientists, a lack of Oxygen is why body organs deteriorate and why veins and arteries harden.

A lifetime of eating hydrogenated (solidifying) foods combined with low levels of Oxygen could also be the cause of muscle, tendon and joint stiffness, usually associated with old age, but seen more and more in younger people.

Besides breathing, we get Oxygen from our food. Clean, healthy bodies burn food more efficiently than bodies full of waste. Many people, after increasing Oxygen levels, report diminished appetite since the food they eat is now utilized so well.

There are multiple factors that contribute to overeating, but one of them is due to the body attempting to get more Oxygen to the cells. Increasing Oxygen levels could result in reduction of unnatural food craving.

Oxygen severely hampers virus’ ability to spread, as was illustrated earlier. This is how it happens:

Each cell in your body contains 2 substances, RNA and DNA. These contain the genetic blueprint for each cell and thus the whole body.

Viruses are not cells. They are either RNA or DNA genetic material – never both. Since they have only half the genetic material and can’t reproduce on their own, they hook onto the DNA or RNA of a healthy cell taking it over and forcing it to reproduce copies of itself, the virus.

However, Oxygen can inhibit this viral ‘slave labor’. How? Well, to spread, a virus must travel using the fluid surrounding each cell as its roadway. If this fluid has little Oxygen – as sometimes happens when you’re run down, stressed or ill – there is hardly any resistance to viral invasion.

On the other hand, if the cellular fluid is well oxygenated, not only is it difficult for the virus to invade a cell but it’s also hard for it to leave its host cell and infest your body.

To benefit from Oxygen must you hook up to an oxygen tank? No. A wonderful new substance has been developed which gives you safe, clean Oxygen – merely by adding a few drops to a little water! But how does it work?

Did you know that water has vast stores of Oxygen? A single glass of it has, potentially, cubic meters of Oxygen. The problem is that each Oxygen Atom is ‘trapped’ by two Hydrogen atoms and can’t be budged – until now, that is!

‘Oxygen Boost’ is a concentrated liquid developed by Life Leader which, when dropped into a little water loosens its Oxygen and makes it available to your body.

What makes ‘Oxygen Boost’ special is that it’s ALKALINE. This benefits you in 2 ways. Firstly, it results in Oxygen being released 30 TIMES faster than normal giving you needed Oxygen lightning fast.

Secondly, it helps neutralize excess acidity within your body. ‘Oxygen Boost’s” alkaline formula preserves the pH of a healthy body.

So power up on Oxygen the alkaline way!